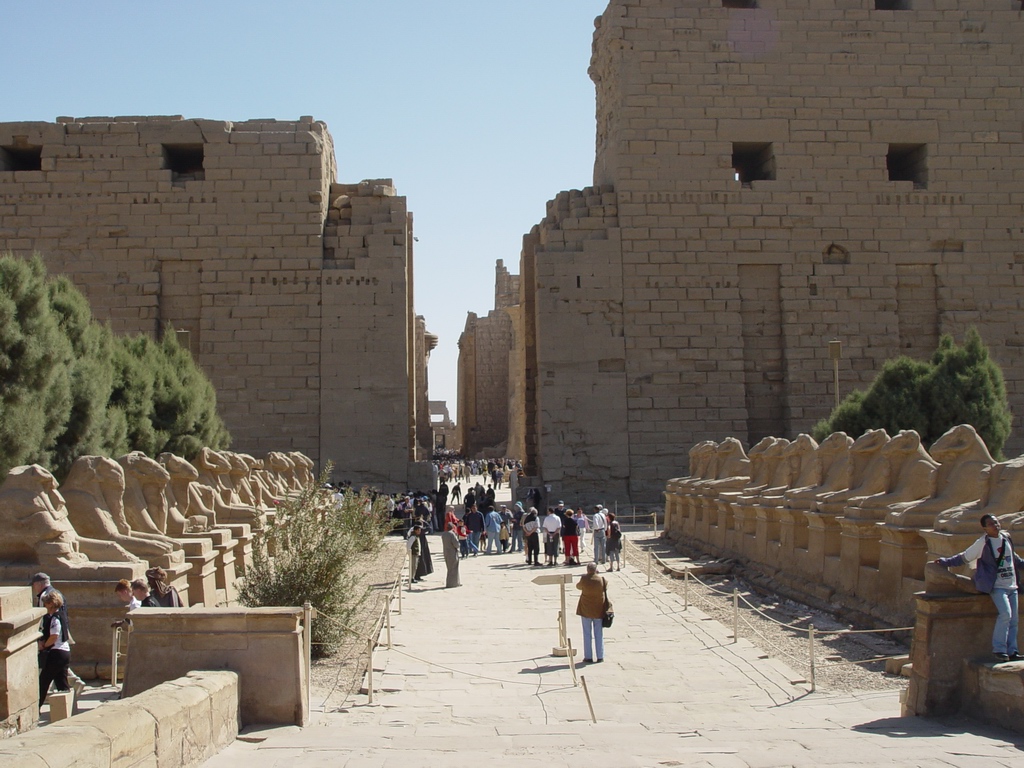 Is unique among the cities of the world. Wherever you tread you feel past and present at one and the same time. There is hardly a place in the city that does not have a relic that tells of the grandeur of the ancient Egyptians several thousand years ago. Luxor, the world’s greatest open-air museum, is filled with awe inspiring monuments of ancient civilizations.

Where does the name “Luxor” come from?
Luxor was part of ancient Thebes and was called “The City of one-hundred Gates” because of its many buildings and large gates. The city grew steadily over the years, and the Arabs, impressed by its beautiful places and huge edifices, re-named it Luxor: City of Palaces. The name Luxor has its origin in the Arabic word el-Uqsur, the plural of el-Qasr, meaning encampment or fortification with reference to the two military camps built there during Roman times.

Thebes, which the ancient Egyptians called Waset, extended over the area of modern Karnak and Luxor. In this vast city (at its height it had more than one million inhabitants), which once was the capital of an empire that extended from the Euphrates to Upper Nubia, god Amun was worshipped and the Temple of Karnak was the center of the Amun cult.

Luxor remained the center of power from 2100 to 750 BC. Visitors are overwhelmed by this immortal city with its huge monuments alongside the banks of the Nile. In the east the City of the Living where the life-giving sun rises; in the west the City of the Dead where the sun bids farewell to life!

Modern Luxor is situated on the right bank of the River Nile where ancient Thebes, the city described by Homer as “Thebes of The Hundred Gates”, once stood.

East Bank – Places of Interest
The Temple of Karnak

Consists of three main temples, some smaller enclosed temples, and several outer temples. The temple was built over a period of 1300 years. The three main temples are dedicated to Mut, Monthu, and Amun. There is an open-air museum near the sacred lake. Ramses II built the second pylon of Karnak. The Ptolemies conducted some extensive repair work but left the columns and façade of the First Pylon unfinished.

Passing the Second Pylon leads to the Hypostyle Hall which is considered to be one of the world’s greatest architectural achievements. Constructed during the 19th Dynasty under the reign of Ramses I, work continued until the rule of Seti who also built the Temple of Abydos.

Towards the rear wall of the hypostyle hall is the Transverse Hall and the partially reconstructed third pylon of Amenhoteb. After leaving the Hypostyle Hall a narrow court of several obelisks opens. One of these obelisks was erected by Thuthmosis I (1504–1492 BC)the father of queen Hatshepsut. This obelisk stands 21 meters tall and weighs about 143 tons. Beyond this obelisk stands the only remaining obelisk of Hatshepsut (1473–1458). Just past the Sixth Pylon is the Hall of Records built by Tuthmosis III. Very little remains of this archive beyond two granite pillars. Behind these pillars lies the Holy of Holies, the Sanctuary.

The Temple of Luxor

Was built predominantly by Amenhotep II and Ramses II. The temple was the focal point for rituals and festivals. One of the most important celebrations was the festival of Opet. During the 18th Dynasty the festival lasted for 11 days but was extended to 27 days during the 20th Dynasty. The procession of images of the royal family began at Karnak and ended at the Temple of Luxor.

By the late 18th Dynasty the journey was being made by barge on the river Nile. The Temple of Luxor has a great pylon with carved episodes from the battle of Kadesh when Ramses defeated the Hittites.

Under Ramses II an additional courtyard at the southern end of the Temple of Luxor was built during the 19th Dynasty. This great court is surrounded by papyrus bud capital columns. Within this court stands the minaret of the mosque of Abu’l Haggag, a Sufi Sheikh.

The court of Amenhotep II was built by Amenhotep II. Tutankhamen and Hormoheb added some buildings and completed the works. The colonnade consists of 14 columns with papyrus capitals. At the entrance are two statues with the name RamsesII but bearing the features of Tutanchamon. The east and west side of the court has well preserved double rows of papyrus columns with bud capitals.

Luxor Museum
Recently built, this museum displays countless finds relating to the history of ancient Thebes. The most interesting piece is Talatat’s wall, a re-construction of an 18 meter wall from the temple of Akhen-Aton in Karnak and destroyed by his successors. 283 stone blocks were found in the filling of the ninth pylon of the temple of Amon in Karnak.

The wall, picturing hundreds of small scenes, shows work in the fields and craftsmen at work as well as the Pharaoh and Queen Nefertiti worshipping the sun. Worth mentioning is the elegant head of Hathor in the form of a cow in gilded wood; a large sandstone head with the unmistakable features of Akhen-Aton and a stone statue of Thotmosis I holding the ankh in his hands.

The West Bank – Places of Interest

Valley of the Kings, Luxor
The formal name and title of each ancient Egyptian king and his image are encarved in their individual tombs. From the 18th Dynasty till the 20th Dynasty the kings abandoned Memphis and began building their tombs in Thebes. Most tombs were cut into the limestone and consisted of three corridors, an antechamber and a lower sarcophagus chamber. Here a list of some of the tombs found in the valley: Ramses IV, Ramses IX, Ramses IV, Merneptah, Ramses VI, Ramses III, Seti I, Tuthmosis III, Amenhoteb II, Horemoheb, and Tutanchamun.

But the kings could not rest in peace and undisturbed. Unfortunately nearly all royal tombs were broken in and robbed. Luckily, some priests hid a few mummies of importance. Among those the mummies of Hatshepsut, Thuthmosis III and the mummy of Rames II.

In 1922 Sir Howard Carter discovered the intact tomb of Pharaoh Tutanchamun. This was the most exciting and richest find ever made in Egypt. 2.500 objects made of gold, ivory, silver, alabaster, and wood inlaid with precious stones were discovered in the tomb. In a special room in the Egyptian Museum in Cairo these objects are on display.

Valley of the Queens
The Valley of Queens as well as Princes and Princesses belonging to the 18th, 19th, and 20th Dynasties contains about 80 tombs decorated with paintings. The walls were first covered with Nile mud, then the entire surface was whitewashed and the coloured paintings added. Some tombs found here are:  The tomb of Khaemwese, the tomb of Queen Titi, the tomb of Amen-Hor-Khepesh, and the tomb of Nefertari.

Valley of the Nobles
In the Valley of the Nobles the tombs are much smaller and show different scenes. No description of the journey to the “Afterworld” was found. Instead, detailed pictures of agriculture, hunting, fishing, festivals and ceremonies, musicians and dancers, maids and servants, craftsmen and artisans during the New Kingdom speak of the daily life of the ancient Nobles.

The Ramesseum
Ramses II built his fabulous mortuary temple on top of the destroyed temple of Seti I, where he identified himself as God Amun. The works for his mortuary began during his early reign, and took 20 years to complete. This great temple rivaled the wonders of the temple at Medinet Habu. However, Ramses built the temple too close to the river Nile and the flood waters took their toll. Only a single colonnade remains of the first courtyard.

Temple of Ramses III at Medinet Habu
The entire temple of Ramses III, the palace and the town are enclosed by a defensive wall. Entry is through the Highgate, or Migdol, which in appearance resembles an Asiatic fortress. Just inside the Highgate to the south are the chapels of Amenirdis I, Shepenwepet II and Nitoket, wives of god Amun.

The Temple of Queen Hatshepsut
The mortuary temple of Queen Hatshepsut, designed by the architect Senenmut, is one of the most famous buildings in the world. Originally an avenue of Sphinxes led to the temple. Reliefs on the south side of the middle terrace show the queen’s Red Sea expedition to the land of Punt. Various statues of Osiris line the front of the upper terrace.

Colossi of Memnon
Two gigantic statues guarded the outer entrance gates of an enormous mortuary temple built in Thebes by Amenhotep III in the 18th Dynasty. All that remains today are those two statues of Amenhotep. They were named the “Colossi of Memnon” by the Greeks for the legendary hero of the Trojan War. During time the statues have been badly damaged by nature but the impact is still impressive. They are hewn out of single sandstone blocks and stand 20 meters high.