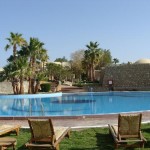 Seti Abu Simbel Abu Simbel, one of the most spectacular sights in Egypt. An ancient pharaonic site, the two massive rock temples were carved into the mountainsides during the reign of King Ramses II in 13th century BC. One to honor the deities of the time, Ra-Harakhty, Ptah, Amun-Ra and King Ramses and the other for the Goddess of Beauty ... END_OF_DOCUMENT_TOKEN_TO_BE_REPLACED Overlooking Nasser Lake, Nefertari Hotel Abu Simble offers air-conditioned rooms. It has an outdoor pool surrounded by loungers. Free Wi-Fi and ais available. Rooms have views of the gardens, pool, or surrounding mountains. Each includes a seating area with a satellite TV. Free toiletries are in the private bathroom. French cuisine and traditional buffet-style dishes are served at Nefertari Hotel’s ... END_OF_DOCUMENT_TOKEN_TO_BE_REPLACED